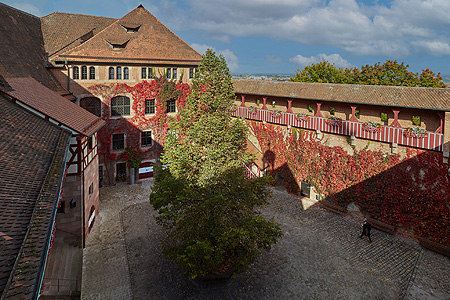 The Bower, which burned down almost completely in 1945, was reconstructed exactly as it was before from 1968 to 1971. The first building was probably erected in around 1220 during the Hohenstaufen era. In the 1440s under Emperor Friedrich III (1415-1493) the Bower was pulled down and replaced with an asymmetrical brick building with four floors and a massive hipped roof, and at a later date the faVade was altered through the addition of larger windows. Since 1999 it has housed the Imperial Castle Museum, a branch of the Germanisches Nationalmuseum, which is devoted to the history of the castle and its military aspects. Excavation findings, ornamental building elements, models and reconstruction drawings bring the history of this important complex to life.

Armour of a member of the patrician
family Rieter, end of the 16th century
© Germanisches Nationalmuseum

The collection of historical protective and assault weapons such as body armour, firearms and staff weapons, shields and other accessories show how the fighting techniques employed at castles changed over the centuries. A scaling ladder and a pavise shield are unique exhibits of international importance documenting late medieval fighting techniques. From the 16th century on, firearms began to dominate the battlefields. The traditional weapons were gradually no longer needed for their original purpose and were instead displayed as splendid status symbols, for example during imperial visits to Nuremberg.

Historical saddles, stirrups, snaffles and spurs show the physical stamina required of rulers of the Holy Roman Empire and their retinue, which is usually vastly underestimated today. In order to be able to fulfil his duties, the emperor often had to travel enormous distances on horseback in all weathers.

In 1677 an observatory was established by G. C. Eimmart in the Vestner Gate Bastion, which had a widespread reputation for its accurate measurements. Its precision was due to an astronomical clock, a pioneering scientific achievement in its day.