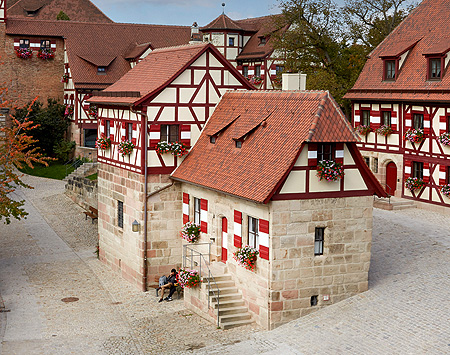 In the middle of the bailey is one of the most important buildings in the castle complex, the well house with the Deep Well. The two-storey building dates according to the inscription from 1563, and the half-timbered storey was completely renewed in 1951.

Although the first documented mention of the "Deep Well" dates from the 14th century, it is undoubtedly older. It was probably created at the same time as the first buildings of the Imperial Castle, since a castle without its own, protected water supply – especially in the case of a siege – is unthinkable. The well never fails to impress: from the top of the 16th-century parapet built of sandstone ashlars, the shaft has been driven down over 50 metres into the rock. A depth which is convincingly demonstrated during every tour of the castle. 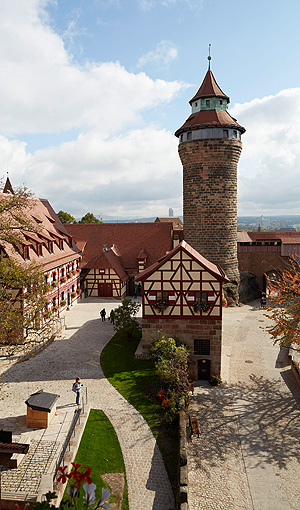 At the east end of the bailey, on a particularly high point of the rocky spur is the so-called Sinwell Tower (2nd half of the 13th century). Visitors prepared to make the ascent are rewarded by a breathtaking view of the old centre of Nuremberg. The Sinwell Tower also has an exhibition of photos showing the castle and city after destruction in the Second World War.

The tower was named after its cylindrical form: “sinwell” in Middle High German means approximately “extremely round”. The slender tower made of neatly constructed rectangular rusticated ashlars, was raised in the course of major alterations to the castle in the 1560s by a further floor with a pavilion roof surmounted by a pointed helm. The new helm with a complex wooden support construction inside replaced the original which had four oriels like that of the "Luginsland" put up by the city in 1377.

The Sinwell Tower served as a "keep", in other words it was primarily built for status and defence purposes, and probably functioned mainly as an optical deterrent. Because of its considerable height, attackers could be detected quickly.

With its massive construction and an entrance which was originally half-way up the tower, it was predestined for use as a repository, as a treasury or a prison. In spite of its exposed position, the round tower with its wooden roof construction was one of the few castle buildings to survive the bombing of Nuremberg. The present entrance is through an extension on the north side; the wooden staircase inside which leads to the platform probably dates from the 18th or 19th century.