Up a few steps from the inner courtyard is the large hall on the lower floor, the so-called Knights’ Hall. 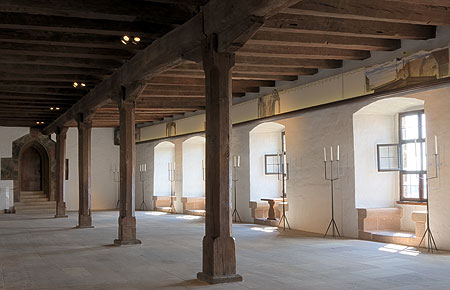 In the Middle Ages, this was where the emperor received delegations, met the most important people in the realm and regulated legal matters when he was in Nuremberg. The emperors of the Holy Roman Empire were constantly on the move. Because their empire had no capital, they ruled from imperial palaces and cities which they visited in turn. One of their most important centres of government was the Imperial Castle.

What was it like when the emperor arrived with his retinue in Nuremberg? In the Knights' Hall you can see the scene every twenty minutes above the windows: on the basis of historical pictures, the procession is depicted on its way from the Spittlertor through the decorated city and up to the castle, accompanied by the ringing of bells and festive music. 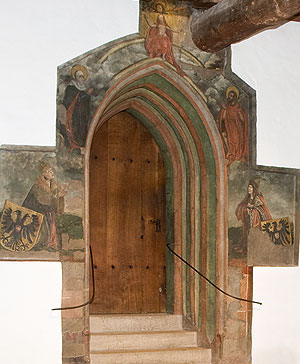 Portal leading to the Imperial Chapel

Today the Knights’ Hall looks approximately as it did during the visit of Emperor Friedrich III in the year 1471. This two-aisled room is dominated by a ceiling consisting of 30 transverse beams resting on a massive joist which is supported by five oak columns. From the window wall with its deep side seats there is a splendid view of Nuremberg.

In the east wall a richly profiled pointed arch portal, surrounded by late Gothic paintings, leads into the Imperial Chapel, which is several steps higher than the hall. Over the arch apex is Christ as Judge of the world, on the left is Emperor Friedrich III with the Habsburg coat of arms (the imperial eagle with the Austrian escutcheon) and on the right his son Maximilian I with the Habsburg-Burgundy coat of arms. The latter dates the paintings to the period after 1486, as Maximilian only used the alliance coat of arms from this time on.

further on to the Imperial Chapel