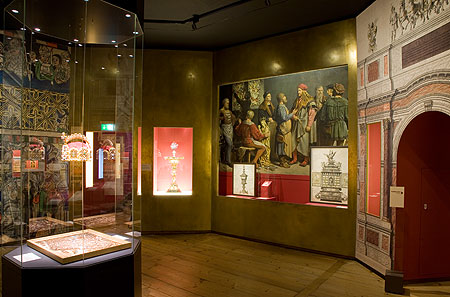 This room covers one of the main themes of the permanent exhibition: the city and the emperor. In the middle of the room the imperial crown thus hovers above a model of what is instantly recognizable as the city of Nuremberg. The model dates from 1540 – and is the work of the Nuremberg painter and woodcarver Hans Baier. It is in fact the oldest known topographical model of a German city.

Also in the Corner Chamber are paintings by famous Nuremberg artists, gifts presented to the emperor, the imperial regalia and documentation of the "Heiltumsweisung", the ceremonious presentation to the public of the relics that formed part of the imperial treasure.

back to the Emperor's Chamber

further on to the Insignia Corridor