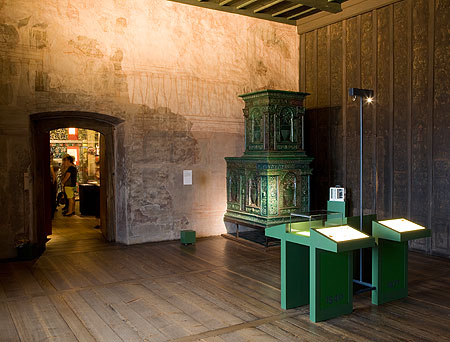 This room, originally known as "the Emperor’s Green Chamber" was occasionally used as a bedroom. It is dominated by the magnificent painted ceiling with the double eagle which dates from the 15th century.

The colours of the large two-headed imperial eagle, which occupies the whole ceiling, have been reversed, so that the eagle is yellow and the background black.

In 1520, to honour the newly crowned King Charles V, the eagle was covered over by the coat of arms ceiling which is now in the Emperor’s Living Room. The imperial heraldic animal came to light again during rebuilding work in 1834. In the Second World War the ceiling was stored in a safe place and was reinstalled intact after 1945.

The wooden panelling on the north and east walls featuring Renaissance grotesques in shades of green was restored under R. Esterer in 1934. The mural with Emperor Charles V and his brother and successor Ferdinand I was also uncovered; this was badly damaged in the Second World War and was restored when the building was reconstructed.

back to the Emperor's Living Room

further on to the Corner Chamber