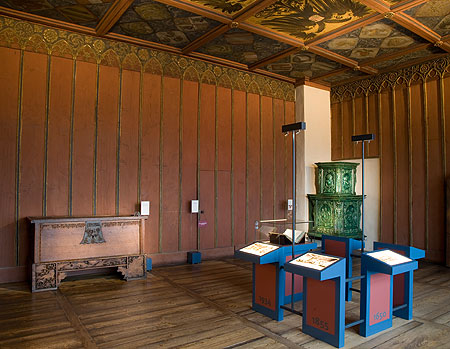 The Imperial Hall leads into the smaller rooms of the so-called Imperial Apartment. Although they were gutted by fire in the Second World War, much of the late medieval wall panelling and a historical ceiling could be saved.

The wall panelling with tracery and tracery rosettes in the Emperor’s Living Room is part of the original late-15th-century interior. The reconstructed ceiling with the coats of arms of the Austrian-Spanish empire was originally put up in the Emperor’s Chamber in 1520 for the expected visit of Emperor Charles V and was transferred here in the 19th century. The four fields in the centre show the double eagle of the Holy Roman Empire of the German Nation with the coats of arms of the main countries: Austria, Bohemia, Hungary, Castile, Granada, Aragon, Sicily, Leon and Old Burgundy. 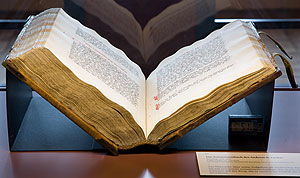 In the Emperor’s Living Room the "Baumeisterbuch" of Endres Tucher, in which a public master builder of Nuremberg in the 15th century describes his professional duties, is on display. His entry for the year 1471 sheds interesting light on an episode in the castle’s history: Emperor Friedrich the Third had announced his visit and the building, which usually stood empty, had to be made habitable by Tucher from the cellar to the roof. A mammoth task … Display stands also show what the room looked like in the 19th and 20th centuries.

back to the Imperial Hall

further on to the Emperor's Chamber